JAJOUKA BARAKA: A Benefit Album for the Master Musicians of Jajouka

by The Master Musicians of Jajouka, led by Bachir Attar with special guests 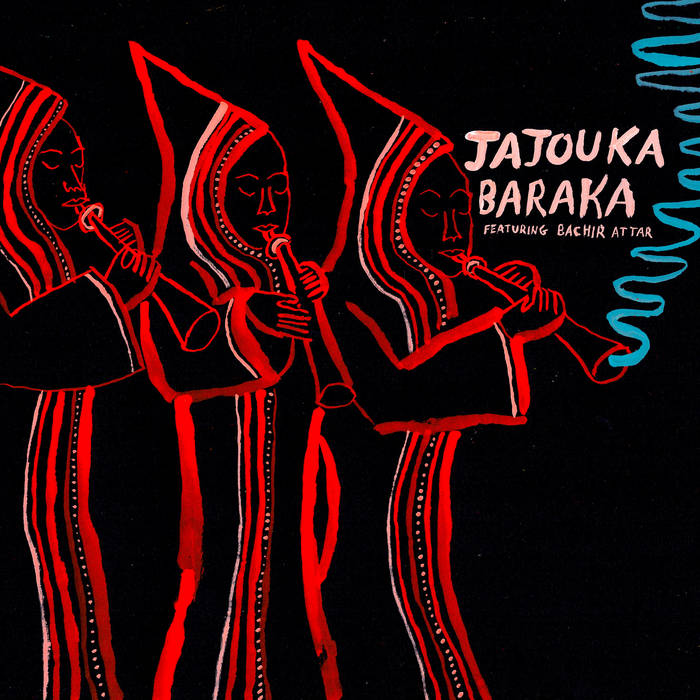 Ted Mattes Arrington is not just a superior musician and seeker he is a facilitator of other artists, tirelessly. He deserves all of our support.

"If the Master Musicians of Jajouka ever stopped playing, the legend holds the world will end...but the Pipes of Pan survive to this day. Listen to this music, the primordial sounds of a 4,000 year old rock 'n roll band...listen with your whole body, let the music penetrate you and move you, and you might connect with the oldest music on earth."
- WILLIAM S BURROUGHS, liner notes to “Apocalypse in the Sky” by The Master Musicians of Jajouka featuring Bachir Attar

When “Apocalypse in the Sky” first appeared in 1992, I listened utterly transfixed by this vibrantly pulsing sound, what seemed like a thousand buzzing bees in the wailing ghaita reeds, pushed off the edge of the abyss by a cavalcade of drummers. This is a timeless music that propels the imagination forward into hyperspace, using soundwaves to penetrate the forbidding yet elastic barriers between dimensions. I learned that the music was played for ecstatic healing rituals in festivals for “Bou Jeloud,” with a virile young dancer wrapped in mystical hairy goat-skins that some speculated was a secret living relic of the ancient rites of Pan, somehow surviving storms throughout the millenia tucked away in a tiny isolated village in the Northern Rif Mountains of Morocco. I played this album on repeat during my first years of college, sparking in turn my own mythic imagination in search of a music that could bring healing and release in a damaged world.

Nearly three decades later I find myself in the very cave of Bou Jeloud, looking out above the olive fields adjacent to Bachir Attar’s and his Master Musicians’ small compound, the invited guest of Bachir Attar himself!

Some extremely fortuitous circumstances had connected us in the year just before- a music festival in Melbourne, Australia and later a performance piece called “Dream Machine” directed by Sophia Brous and Dave Harrington that used the work of Brion Gysin to create a kaleidoscope of audio-visual overload with a small orchestra of international musicians, of whom Bachir Attar and his brother Mustafa were an essential component. Improvising to precise cues with projected animations and palpitation-inducing strobe effects while Genesis P. Orridge recited from Gyson’s texts, the Attars and I formed the “horn section” of the piece and had a wild time getting to know each other during the long rehearsals and intense performances. I asked a few questions and I got to hear quite a few stories during that week of working together on the “Dream Machine”, and those stories in turn gave us all some ideas. We decided I was to meet them in Morocco where together we might further explore the future of their ancient sound and its potential for global healing. We would launch away from the realm of “ideas” into the alter-dimension of PURE MUSIC.

Armed with bass clarinet and soprano saxophone I arrive in Tangier, met at the airport by Mustafa Attar. We go directly to “Itesa”, the former residence of literary legend Paul Bowles. I have a couple days to explore the labyrinths of Tangier before the arrival of Jacopo Andreini, a multi-instrumentalist and recording engineer from Italy with a keen ear for North African rhythms, and a dear friend and collaborator for over twenty years. Jacopo had discovered the music of Jajouka even earlier than I had- his father possessed some rare LPs cut in the 1970’s, and in 1996 Jacopo was able to attend a historic concert of the Master Musicians of Jajouka paired with Ornette Coleman’s quartet at Auditorium Flog in Florence. Luckily enough, he had a walkman cassette recorder in his pocket at that concert, and thus we now listen to that very recording during our bumpy trek up from Tangier to the mountain village of Jajouka, with Bachir dancing along behind the wheel while driving!

The ancient music of Jajouka is shrouded in mystery. Without depleting her secrets, I can share that within the inner sanctum of the Attar family compound is a bright blue door that opens into “The Magic Room,” blazing in the splendor of Jajouka myth and history. There is a guest book dating back to the 1960’s when Bachir’s father was the group’s leader, filled with the notes and signatures from a jaw-dropping assortment of psychedelic pioneers and counter-cultural luminaries such as Burroughs, Ginsberg, Gysin, Paul Bowles and Timothy Leary, movie stars such as Catherine Deneuve, and musicians of every shape, from Ornette Coleman, the members of the Rolling Stones, Donovan, Bill Laswell, even Flea from the Red Hot Chili Peppers! Here I gain a different kind of understanding for Bachir and his particular predicament as the Twentieth Century inheritor of a centuries-old family tradition- and for the Master Musicians of Jajouka as the very first breakout “World Music” phenomenon.

With water boiling constantly to fuel us with pot after pot of strong Arabic coffee, our bellies full of goat tagine with every bite of bread drenched in the village’s prized olive oil, the music each night grows successively stronger. I love how Bachir dances along waving his arms about while listening back to the recordings of our best takes. This music COOKS. The holes in a bass clarinet don’t line up precisely with the holes in a ghaita- they come close but it’s a matter of subtle shifts in embouchure to match the root tone, which usually goes up half a step towards the midsection of most pieces. As the “free jazzer” special guest in Jajouka, I have the most enormous shoes in the world to fill. We want to follow the trail left by Ornette Coleman in his extraordinary explorations with the group starting back from the time when Bachir’s father was the leader. I feel Ornette’s spirit ever-present with us in these nights, and his name is mentioned again and again as Bachir tells us he was the only one who could truly understand his father’s music. Legacies.

There are many legends about the Master Musicians of Jajouka. In the old days, it was said that pilgrims would travel many days and miles to be cured by their drums and the piercing assault of ghaita, the Masters’ distinctive double reed instruments. The music was an ecstatic healing tonic for pummeling all manner of illness, but especially mental/emotional conditions of all colors. During festivals the playing would continue for many days without pause. The Master Musicians numbered dozens in those days, maybe more than a hundred in some years- if one player tired of the circular breathing without end, he could take a break and there would always be another piper or two waiting in the wings to pass the torch like in a relay race. It was said that if The Master Musicians of Jajouka ever ceased to blow their pipes, it would be time for the world to end. Today there aren’t more than seven left, and it certainly does feel like the days of the Earth as we know it are precariously numbered. We offer this music humbly as a healing tonic for the whole world, especially in the curious malaise of our current hour, that it may connect you to that which delivers you strength and joy.

All funds raised from donations to this project will be sent directly for the benefit of the Master Musicians of Jajouka, so that, in’shallah, the Pipes of Pan might continue to blow.

mixed and mastered by Jacopo Andreini

If you like JAJOUKA BARAKA: A Benefit Album for the Master Musicians of Jajouka, you may also like:

Bandcamp Daily  your guide to the world of Bandcamp